The Boeing Company emerged from World War II as the leading builder of large aircraft. It was experienced at selling planes to the military, although it had not experienced large sales of its civilian airliners.

The company's development of a commercial jet airliner was a gamble on which the entire company was bet. But with the advent of the 707, Boeing developed a successful commercial jetliner and the basis for new cargo and aerial refueling aircraft for the Air Force.

The KC-135 Stratotanker is similar in appearance to the commercial 707, but has a narrower fuselage and is shorter than the 707.

The KC-135 was initially used for refueling strategic bombers, but was used extensively in the Vietnam War and later conflicts such as Operation Desert Storm to extend the range and endurance of US tactical fighters and bombers.

The Stratotanker entered service with the U.S. Air Force in 1957, and remains in active service in 2020. It is one of six military fixed-wing aircraft with over 50 years of continuous service with its original operator.

The next generation Air Force tanker was the KC-10 Extender, to be followed in 2017 by the Boeing KC-46A Pegasus which is based on the Boeing 767.

Variants of the C-135 airplane were utilized for other purposes, including presidential aircraft, such as the VC-137, also known as the C-137 Stratoliner.

Boeing would eventually build over 800 of the C-135 series aircraft.

Towards the end of Eisenhower's term in 1958, the Air Force added three Boeing 707 aircraft into presidential fleet. In October of 1962, the Air Force purchased an additional aircraft, a VC-137 designated as Special Air Mission (SAM) 26000.

SAM 26000 served presidents from 1962 to 1998, carrying Presidents Kennedy to Clinton. It is on display at the Museum of the U. S. Air Force in Dayton, Ohio.

In December of 1962, another VC-137C was added to the inventory, known as SAM 27000. Today, 27000 is on display at the Reagan Presidential Library in Simi Valley, California.


Photos from the Airplanes Online Archives 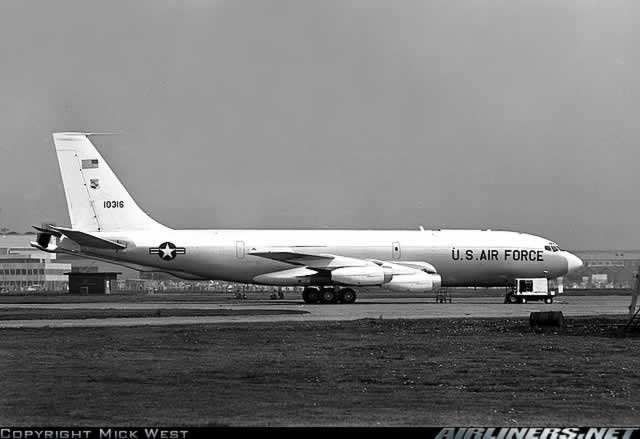